Here is a very simple forex trading system using the example of AUD.JPY and Heikin Ashi to determine entry signals. This is meant only as an exercise to aid in implementing your own system, with or without Heikin Ashi (HA).

First let's take a look at the long term chart of AUDJPY, going back to before the 2008 financial crisis. 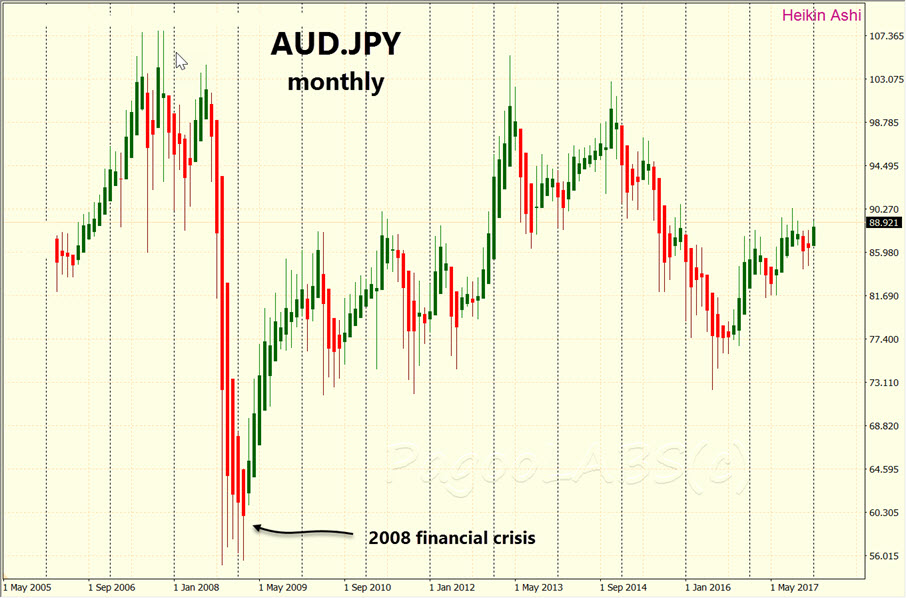 The first thing that stands out is the lack of any meaningful trend. All the price action has been contained within the extremes of the 2008 event. In an earlier story I discussed how to move to a shorter timeframe when no trend was clear on the current one.

The weekly is just as aimless, while the daily timeframe has been sideways throughout 2017 with distinct legs up and down. From mid September we saw a good run down on the daily but not enough for the 100 and 200 period moving averages to confirm any down trend. 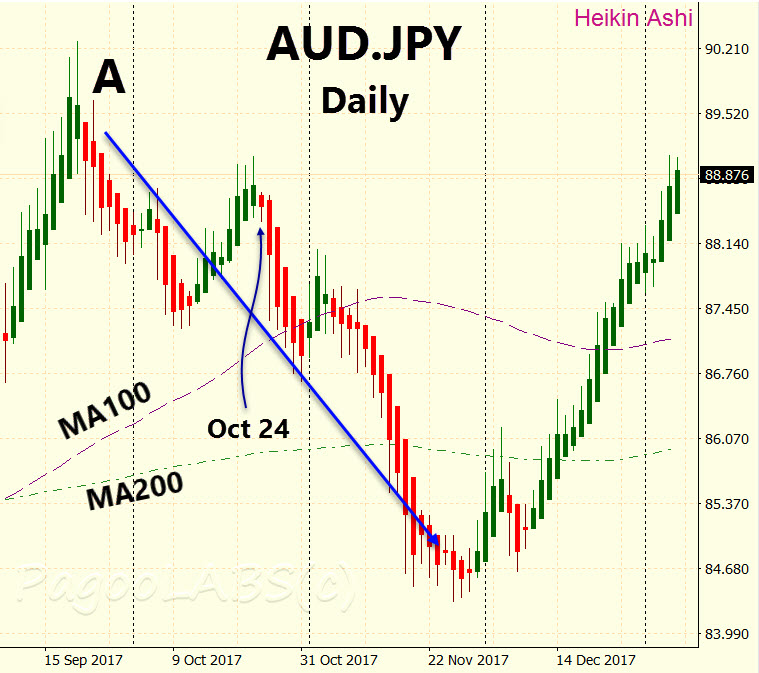 If we focus just on the daily chart and the leg down that started mid September 2017, marked A above, we could say that we have some evidence that a down trend is underway. Now, obviously, this is not enough evidence to short this daily AUDJPY, but it may be supporting evidence for a shorter timeframe. By the time the chart ends in early January 2018, it becomes clear there was no down trend, just a continuation of the sideways behavior noted above.

However on October 24th the market stamped out a lower high and an HA reversal. As I have pointed out in earlier stories, reversals only make trading sense in the presence of a trend. On October 24th, we did not know the future so the question was, what were the consequences of using this information on a shorter timeframe, say the H4?

The supporting evidence is not strong enough to support a trade placed here but given that our earlier stories written around this time used the AUDJPY pair as an example, let's investigate further.

To be consistent we would have to close out any short trades still open in our system as soon as the daily HA reverses upward (turns green). That happened on November 30th. So we are looking to trade short in the period October 24th until November 30th inclusive. 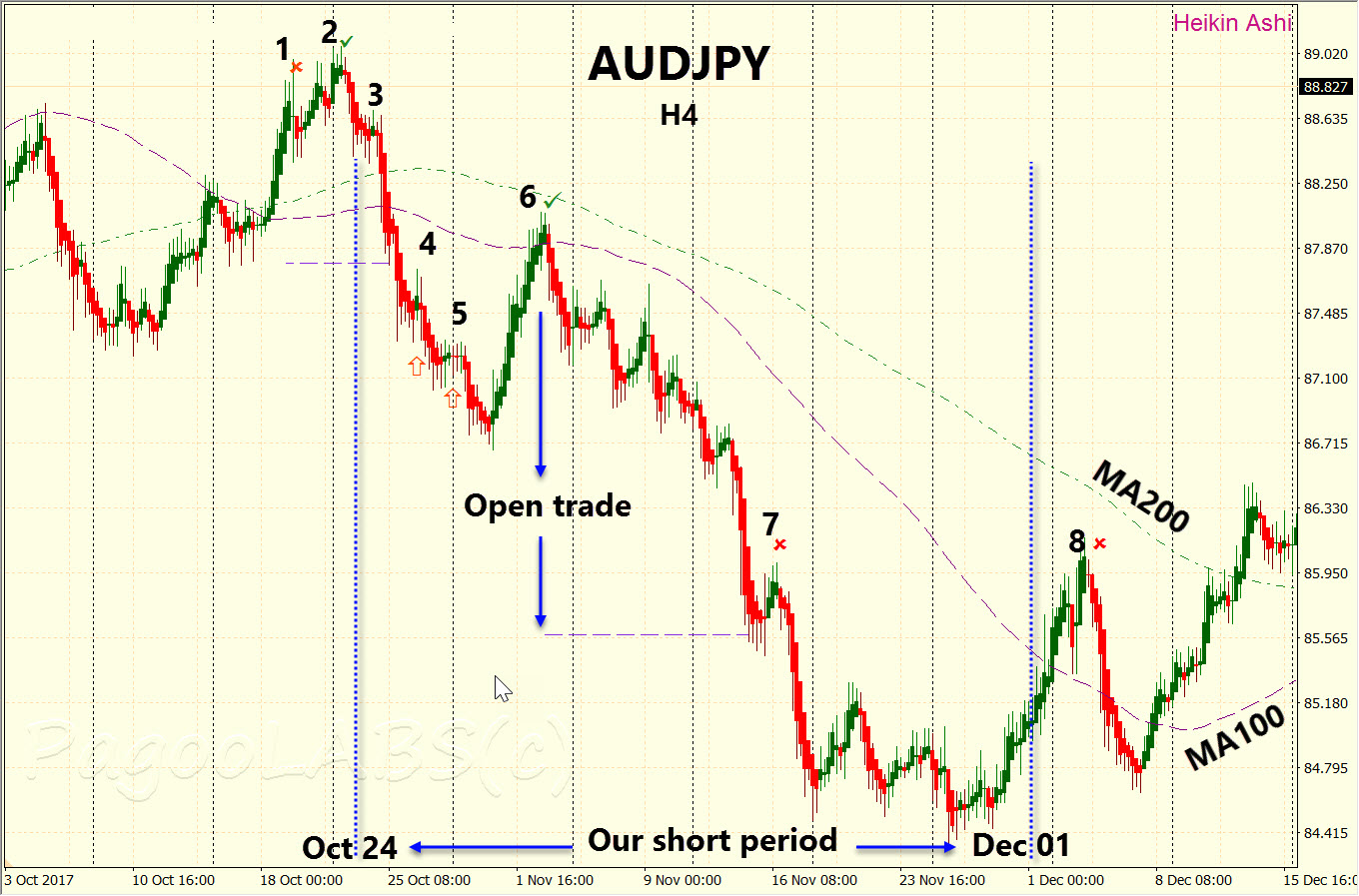 Here, as in the earlier stories, I am assuming a risk-return multiplier of four. This means we automatically close winning trades when they reach four times risk. Whichever method you use to calculate TP, it should emerge from the simulation step where it is the optimum multiplier for a large number of simulations in your market of interest. In the cases I have examined using Heikin-Ashi reversals in a trending forex market, that key risk multiplier is a little less than four. I will continue using four below, but your optimal multiplier will depend on your precise strategy. Calculating the risk multiplier is discussed here.

Looking at the H4 Heikin Ashi above, we can see the shorting period extracted from the daily. The first thing to note is that the period critically satisfies some of the basic down trend characteristics we have seen in a number of our earlier stories:

Looking over all the Heikin Ashi reversals around the shorting period, we have 8 possible trade setups to consider. Not all of them will result in a trade:

If some of these comments are confusing, you might like to look back on earlier stories where the basic trade setup filters are covered. Remember that while #6 is open, no other trades can be simultaneously opened otherwise the trade risk will be greater than 2% of our funds.

Because the daily HA reversal does not finish until close of trading on November 30th, all open shorts should be closed at the open on December 1st. Following this rule, the final trade would be a gain of about 1.5 times risk rather than a loss but I will count it as a loss so as not to inflate the success of the strategy and also because until now I have always advocated holding until the SL or the TP has been triggered. I have not yet discussed any other reason to close early because, quite frankly, getting into the habit of closing open trades for any other reason is a killer of trading profits.

Although the longer timeframe indicated a down trend, the H4 only allowed two trades to open, one win and one loss. However, and this is a key to successful trading, the win was greater than the loss. In this case the win was four times the only loss, resulting in the strategy winning three times your allocated risk. If you allocated 2% of your funds at risk to this strategy, you just made 6%. Not bad for five weeks.

Nowhere here do I advocate you follow such a naive Heikin Ashi reversal system. The point is to show you how to construct your own without relying on expensive, black-box Expert Advisors which often times simply drain your account.

So what happens after the daily reverses up, do we continue the strategy by trading longs on the H4? I leave that as an exercise for you. However, while you may be able to eke out a trading profit doing this, trading the AUDJPY at the H4 timeframe will remain hampered by the fact that this currency pair is not trending at longer timeframes.

As you can see, this systems approach depends on the trend and highlights the importance of correctly identifying which direction the market is trading. It is an important clue that successful trading requires putting more effort into trend analysis than jumping from one indicator to another. The Heikin Ashi signal used here is not a required indicator. You could almost use any other. All that is required is that you open each trade consistently and follow all the rules you have already established in the simulation testing stage.

However there was only a single reversal bar in the pattern and if you take such a setup once then consistency requires you take them always. I have found they often lead to failed trades.

Trade #4 is also a single bar reversal and #5 is a series of inside bars, not really a reversal.

In this case you would win but over time, taking all such patterns leads to problems.

The reason to open after a reversal is that there is a sense the market has tested a price level and rejected it, for now. A single bar back is little more than noise and does not give me confidence the market has rejected anything. But the true test is to simulate a large number of these setups with single bar reversals, or inside bar patterns, and see if their wins exceed their losses.

Finally! A new post. Ive been waiting for this since I stopped using the crazy EA I bought. Jeez what a waste. I wish I could start over. I've been trying some of the ideas here and im still too nervous to jump in but testing on demo is running a profit! Yea first time.

What about those HA reversals following number 7? Why wouldn't those get opened. Won't they fail as well?

Great to hear that constanz.

The period starting just after Thanksgiving until the New Year is a particularly illiquid time of the year in forex. It's a good idea to step away from trading at that time since many of the patterns that had previously worked start to break down. Hence the lack of stories.

About those setups following trade #7:
Trade #6 is a success and triggers the TP at 85.58 on my system. Soon after the market retraces and offers up another short trade opportunity at #7. Since no filters say to avoid that trade, we are compelled to open. Now we are in an open trade with a target of 84.13 and a SL of 86.04. Unfortunately for trade #7, the SL gets triggered before the TP gets hit.

However, as long as we are in trade #7, we cannot open any other trades in correlated markets. That is especially true of the same market, AUDJPY. Because of this important risk rule, we safely miss all the other HA reversals until trade #7 is closed.

This is another reason to avoid closing early - it may lead to opening further trades that go on to fail.

Are there any circumstances under which you would consider going against your outlined rules? After having gone through all of your tutorials and stories I am just wondering when I should consider moving from demo trading into the real thing?!
Your charts are excellent and finally I started to understand a lot more. Thanks!

I would just like to note that the rules listed here are not definitive rules that I advocate in any trading.

They are simply a set of rules that come out of the simulation and back-testing of a simple trend following system that we developed a few months back.

Another set of rules could easily be superior. You would need to follow the methods we talked about in the series on Systems and the following stories. It is important to test the strategy you want to use and under which conditions it has worked in the past. The past is no guarantee that the future will work the same way, but if it has never worked in the past you are unlikely to remain confident in the trades you place.

Never move from demo to live trading until your demo account is consistently profitable. The longer the better, especially if the demo period contains a couple of major market events that have the potential to ruin accounts. If you can survive when others are losing then you are on the way to profitable trading.