This third story in the series "Introduction to Trading Systems" explains a signal, the trigger alerting us to open a position in an instrument.

A signal is a price pattern trigger that opens a position. It might be a crossing moving average, a candlestick pattern such as a pin bar, or one of a host of other available indicators.

A Signal then is a general class of market events that act like triggers. A Setup is a particular instance of a signal and includes all the trade data necessary to open that position.

The difference between signal and setup is much like the concept of dog versus a real dog. In your head you can imagine a dog and there is no chance of confusing one with a horse. But in the real world, dogs come in all shapes and sizes from cute little puppies to Great Danes. We still readily recognize a particular animal as a dog when it exhibits familiar dog-like qualities.

In the same way, signals are a class of triggers while setups are the real-world instance of those signals and provide the actual OP, SL, TP and CO you need to make a trade. You can use the terms interchangeably if you like which might result in some minor confusion, as long as you don't confuse either with a horse. When we talk about a signal, we imagine a reversal or some other specific trigger pattern. When we talk about a setup, we describe the particular SL and OP that surround that reversal, as can be seen in the annotated chart of the S&P below which uses a Heikin Ashi signal. 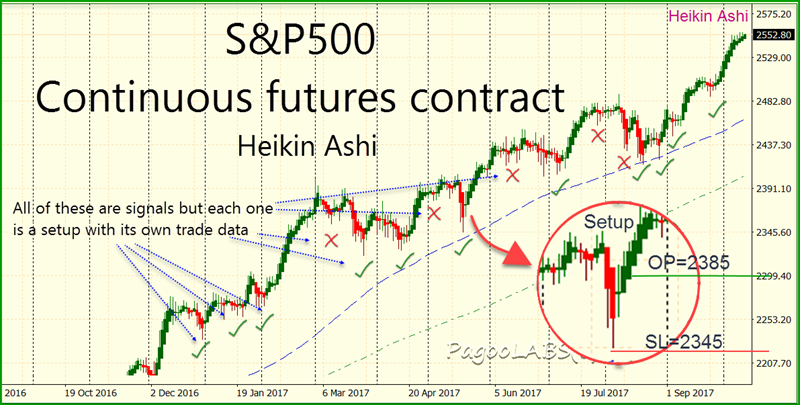 Open Only with the Trend

So far we have discussed trend which I have argued will determine the direction of our trades. Since we only trade with the trend, we should ignore signals that trigger in the opposite direction. In a bull market we only open long. Since a computer program should in principle be able to flag opportunities on a chart, a signal must include all the rules you have decided to check before opening a trade. For example, if you only open pin bars in the direction of the trend then a pin bar at the top of a swing high is not a signal in an uptrend.

Within the trend we can use the setup tool to construct an OP, SL, TP and CS for any candlestick bar. Although I do not advocate your trying this, it explains why we discussed the setup first. The setup can be used anywhere, although probably not profitably. Since each bar has a low and a close, the low could be used as the SL and the OP would use the close of this bar or the open of the next. The number of contracts derives from risk (OP-SL). All we need to finish the setup is an optimal TP.

If we applied such a strategy to every bar on the chart we could expect a disaster. There are too many whipsaw regions where stops would be constantly triggered. This naturally leads us to exclude most bars as open candidates for signals and instead concentrate on the small subset of bars where probability favors our trade.

The key to a good signal is that an area has been tested by the market and rejected. That's where we want to place our stops. The market may come back to test that area again and there is no guarantee our stops will hold. But that's also true everywhere on the chart. The one thing we know about an area of rejection is that it was tested at least once and the level held. Enough other traders entered in the direction of the trend before those levels were breached and that is an important defense of our trade in the future, raising the probability, however slightly, that our trade setup will succeed.

Any pattern that tests and rejects an area of support is a candidate for a signal. Whether it's an acceptable candidate or not remains to be seen. Eventually you will decide on a small class of identifiable patterns that you will use as signals, all other patterns will be considered normal bars. Identifying areas of support (or resistance in a bear market) and how your signal exposes them will be your mission.

We might reasonably impose the extra condition that some kind of retracement occurred before the candidate signal. After reviewing all the historic data we might exclude from our signals any patterns that were not preceded by at least two periods of trading against the trend. This is a filter that you will decide for your own favorite signal. Trigger patterns that are not prominent in some way have not yet tested and rejected an area. The SL level you use must have a higher probability of surviving a retest than any normal bar. 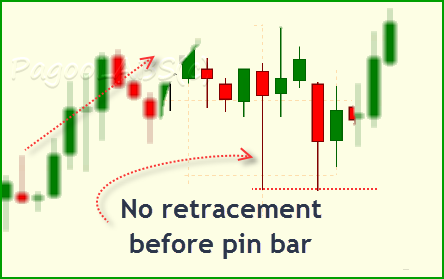 Sometimes the stop loss level is so far away from the open price that the corresponding TP will lie somewhere far in the opposite direction. Reaching such a target price might seem improbable to an experienced trader. This might occur if our prospective SL is a large spike caused by some dramatic news that hit the market, in which case it may be better to wait for the next retracement to enter.

In the same way, avoid markets when major unexpected events are under way such as a war starting, the UK Brexit vote, or the USA 2016 election. Clearly there's nothing you can do to avoid these events if you are already in a trade and the unexpected is happening. But you should avoid plunging into a trade to take advantage of the volatility. Your stops will be highly vulnerable and the days following would be a much better trading environment.

No Waiting: Open According to your Trading Rules

Depending on your signal, you must open at the start of trading of the very next period OR wherever you tested in your simulations. If you wait for a better price you stand to miss out on the trade all together and all your testing results for the signal and system no longer apply.

For example, some setups fail and more of the trades that failed may have fallen to a 'better price' at the open than those that were successful, leaving you with positions in a greater proportion of losers. When this is true, your real trading results will underperform your tests results.

Only One Position at a Time

Since we do not want our total risk in this position to exceed 2%, never open a new trade when one is already open, except in other uncorrelated markets. If your trade is winning, other traders will be on the same ride as you. New signals occurring in the market at that time will be ignored by successful traders because they know not to amplify their risks with more than 2% of their risk capital, or whatever percentage they allocate to an open trade. That means you will be opening a trade where other traders are less likely to join in to help propel the price in your direction. 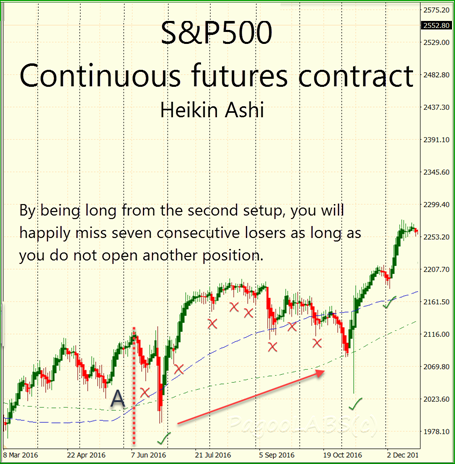 This is also true if there had earlier been a clear signal that you missed for some reason. The other traders whom you would like to join you in this trade are already in that earlier one. There are no secrets in the markets - if you can see a signal worth trading then so can many others. What may look like a pin bar to you could look like an engulfing pattern to another trader using a shorter timeframe. If the price moves up then another trader's MAs will cross. Momentum will also change, triggering even more traders to join the trade. So other traders may be following different signals to you but they may still be triggered to open in the same general area as your signal.

Tread carefully once you have open trades and always check the correlations between the markets you choose. If two markets are 100% correlated then you cannot have simultaneous positions in both markets. It would be as if you were trading the same instrument but with double the risk. For this reason, avoid trading in correlated markets until you have exited the other position. If you are unsure about correlation in general or whether two markets are highly correlated then it's best to just trade one market at any one time.

A signal then is a set of rules about when to enter a trade. On the one hand there are the mechanical rules that I discuss below, such as a pin bar must occur or an MA must cross. These are mechanical because they involve no discretion and arise straight from a pattern of market prices on the chart. On the other hand there are filtering conditions we might apply before we open a trade. For example:

You might apply filters such as these after testing and observing their effects on the total profit of the system, as I discuss later. However, you the reader have a lot of fertile territory to improve on what we lay out here. Many filtering conditions will depend on the precise trigger you are using.

A common set of filters are the momentum oscillators such as RSI and MACD. Filters tend to keep you out of trades, which is their purpose. However watch out in your testing to see if they add to or reduce your total wins. Helping you avoid bad trades is good, but keeping you out of good trades that win multiples of what you lose in bad trades is toxic.

For a signal to be acceptable it must be immediately recognizable as the pattern you are seeking. Testing should already have confirmed that similar signals are profitable and it should have relatively complete coverage of the trend.

By complete coverage I mean that the signal will allow us to participate in the full run of the trend. If stopped out, we should receive another chance to enter via a subsequent signal. Buying at the bottom and selling at the top would of course be full coverage, if only such a thing were consistently possible. Missing the entire trend altogether would be zero coverage. We should prefer a signal that has better coverage because it's more likely to keep us in open positions during more of the trend.

Moving average crosses and Heikin Ashi reversals are two examples having almost complete coverage, while pin bars depend on how often they occur in the relevant section of the trend.

There are many different kinds of signals and traders have their own favorites. Since this is an education site, we are agnostic here about which signal you use. In the descriptions below, I will deliberately use the simplest signal I can find. My purpose is to describe how to go about building a system, not to advocate for any particular signal.

In other stories and posts I may use different signals just to show how widely the system method can be applied. A system does not require any one signal strategy but it does need a trigger in order to open positions. For this reason, you will have to select a signal method you are comfortable with.

It may well be that it does not matter in general what signal strategy you decide upon. What may be more important overall is how you apply it. I will discuss this further in the story about Systems.

In the next story I will discuss several common and not so common signal strategies: the MA cross, pin bars, engulfing patterns and the Heikin Ashi reversal. These are all just examples and you are encouraged to use whatever signal method you have been using to date.